11 THINGS to do in LISBON in ONE DAY with KIDS.

Yep. We did just that…with a 7 and a 3 year old and a buggy. Nailed it. Goes to show you what a bunch of culture hungry (deprived) parents can do. But you can pace yourself as well 🙂

Lisbon city break with kids was a HUGE success for us. People couldn’t be any friendlier. And Lisbon couldn’t get any more interesting and exciting place to explore. We felt like royalty because of the way we were treated based on having a buggy. So if you thinking of putting traveling for later because your kids are too small don’t…or you will miss out on all the perks that come with having an under 3 year old. Huge thanks to Isabella for coming with us, even though there were a few moments when we wished you stayed home. 🙂

First 6 attractions are all located next to one another. Uber driver who took us to Monastery of Jerónimos that morning was a really friendly guy, who lived in Poland for a few years and told us he was about to go there for his twin brother’s wedding! He made us a list of a few places we must visit while in Lisbon, so we did….we saw 11 attractions in one day. Yep! I counted. 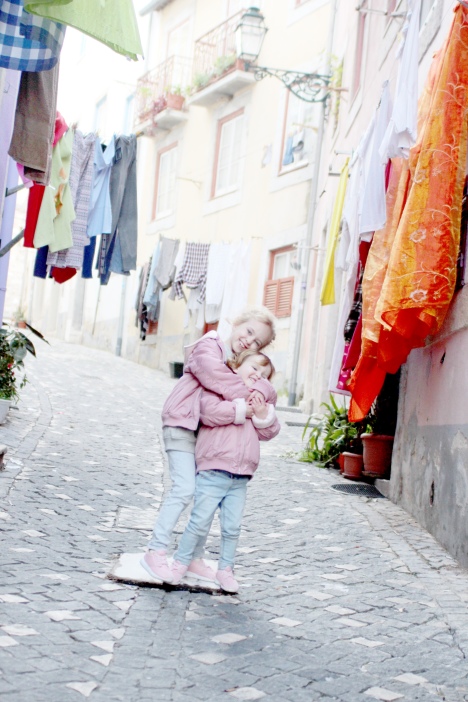 1.Tower of Belem. This fortified tower is a UNESCO World Heritage Site (along with the nearby Jerónimos Monastery) because of the significant role it played in the Portuguese maritime discoveries of the era of the Age of Discoveries.

2.  Jeronimos Monastery is one of the most prominent examples of the Portuguese Late Gothic Manueline style of architecture in Lisbon. It was classified a UNESCO World Heritage Site, along with the nearby Tower of Belém, in 1983. Also nearby are delicious famous PASTEIS de BELEM…just saying 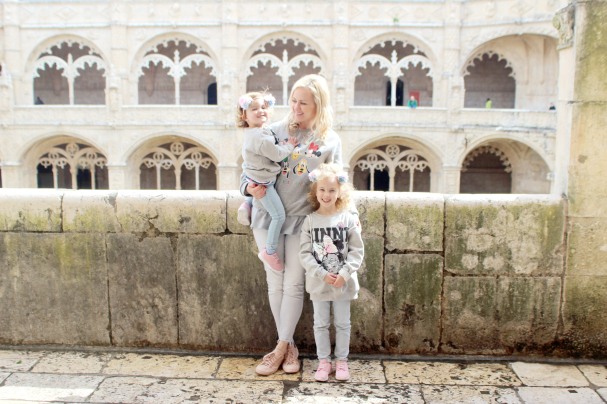 Monastery staff treated us really special, because we had a child in a stroller. They catapulted us into the front of the huge line so we got in in about 5 minutes…to an overly touristy place that everyone wants to visit if they come to Lisbon. Lucky us! Thanks Isabella for coming along with us..even thought there were a few times we wished you stayed home….

3. Pasteis de Belém – It’s conveniently located just near Jeronimos Monastery’s. Be ready for the long lines. We came prepared 😉 My rain coat from New Look proved to be a lot more functional than just being a mac. It’s been made into a picnic blanket by the girls which came super handy while waiting in a long line outside Pasties place. 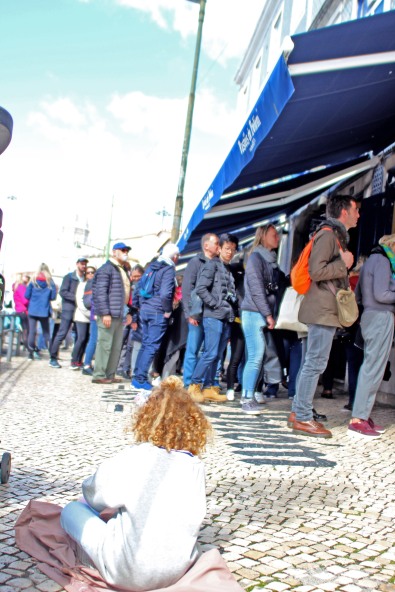 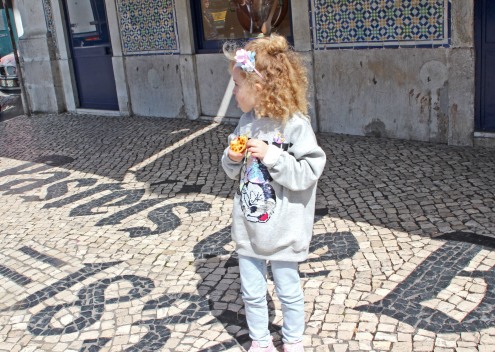 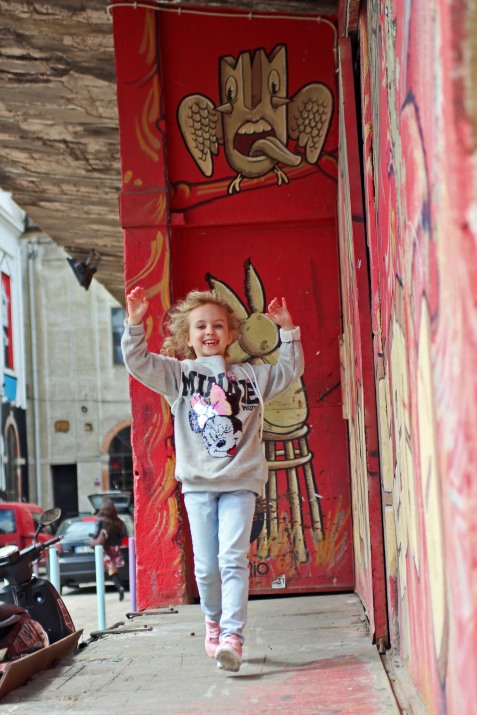 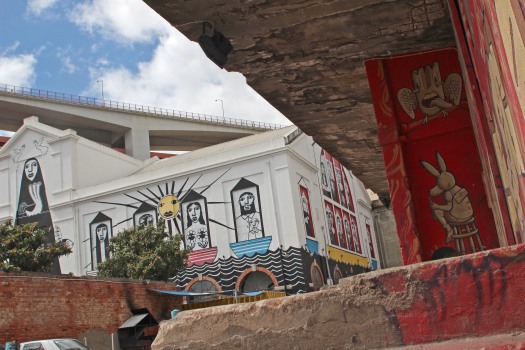 6. Vhils Graffiti. An old woman graffiti carved in the old building by @vhils a famous graffiti artist who creates his art to humanize the city of Lisbon (that’s what he said on tv a night before our trip there anyway. How amazing was the timing of that program?!? thanks bbc4 ‘An Art Lovers Guide’ or should i say Obrigado?) .

Vhils lives and works in London and Lisbon. He gained prominence when his work of a face carved into a wall appeared alongside a picture by street artist Banksy at the Cans Festival in London in 2008. A photograph of him creating the work appeared on the front page of The Times. 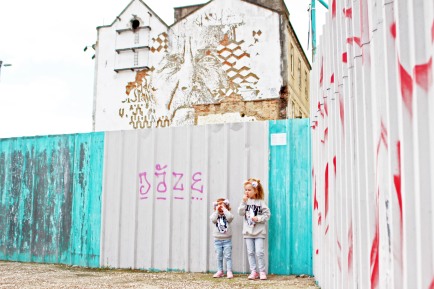 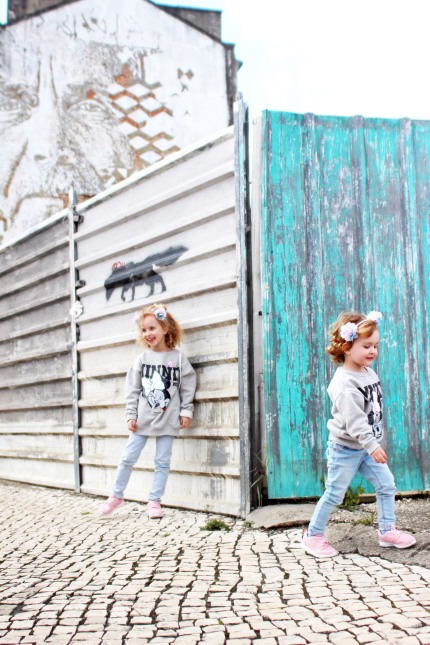 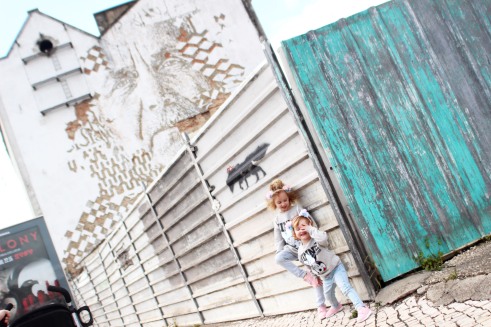 7.  Doca de santo amaro. A patch of old warehouses converted into waterfront restaurants and bars that serve plenty of sea food to satisfy the hungriest and fussiest of us. Is very close to previously mentioned attractions and is a perfect place to have lunch.

Where: Alcântara/Belem
How: Take the Cascais train from Cais do Sodre Station to Alcantara-Mar, exit the station to the left and walk towards the bridge.

This much room left for Ice Cream. 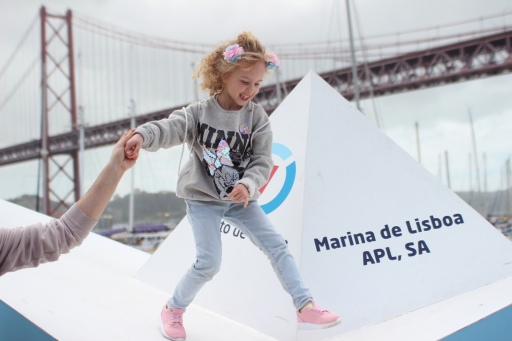 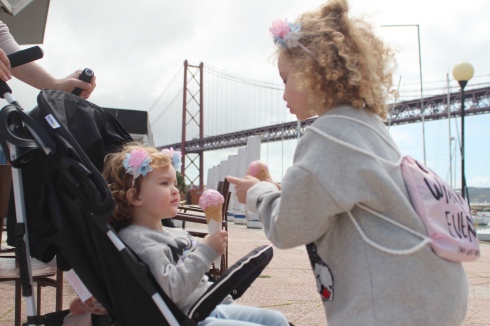 8. Pink Street. Girls loved that the color of the street matched their trainers.

10. Santa Justa lift. Great for dancing it off apparently. It’s an elevator (lift) connecting two streets, one of which is on the hill and another isn’t. Clever clever Portuguese 👏 We ended up avoiding going on the lift as this time the line was way long and there was an off putting lack of a special treatment for people with pushchairs this time. Unbelievable! 🙂  TRAVEL TIP: To avoid unnecessary queues you can get to  Carmo Convent (by uber or by walking up streets) and view the lift from above.

11. Carmo Convent Lisbon.  I personally found this place fascinating and made sure we got up there to see it.

The medieval convent was ruined during the sequence of the 1755 Lisbon earthquake, and the destroyed Gothic Church of Our Lady of Mount Carmel (Portuguese: Igreja do Carmo) on the southern facade of the convent is the main trace of the great earthquake still visible in the old city.

12.  Tram Ride! Portugal’s capital currently has five different routes and 58 trams, of which 40 are vintage streetcars. The heritage trams are small, nostalgic and an emblematic symbol of Lisbon, making great photos.  In operation since 1873. 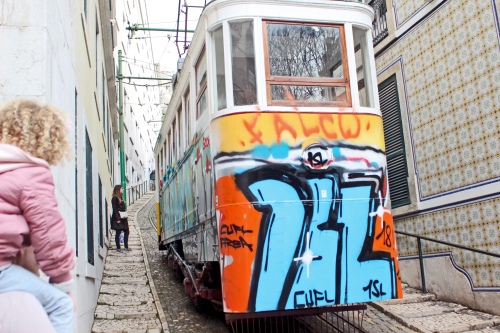 Nostalgic Tram nº 28. The nostalgic tram 28 is an institution in itself. This wooden tram will transport you to another era. Its horn rings constantly to warn absent-minded pedestrians to move out of the way when it runs past the city’s long and narrow streets.

Tram nº 15. The tram 15 is the most frequently used tram in Lisbon because it connects the city center and Belém.

13. Attraction nr 13!  since you will be seeing it and roaming through it a lot anyway.

Lisbon streets is a major attraction in itself. Couldn’t get enough of buildings covered in colorful mosaics, narrow streets with washing hanging everywhere. So unique and so friendly. You get a special treatment if you own a pair of small kids as well (the smaller the better apparently a pregnant woman is treated like a walking goddess). 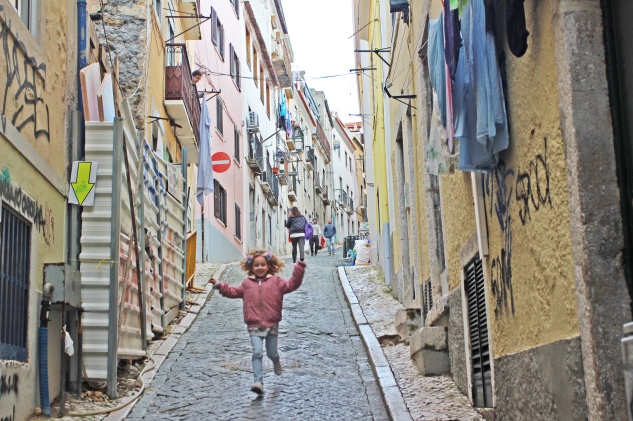 And Parents loved exploring this amazingly artsy city. It was a win win.

6 thoughts on “Lisbon with kids.”